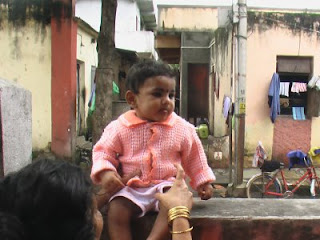 Jan 18th 2008: A Friday- I clearly remember this day as this week-end I had decided not to travel to Pune from Mumbai over the week-end. I was travelling continuously for the past 2 months and was very tired. I clearly needed some rest for myself. And just 2 days before gee had called telling that Jithan wanted to visit Mumbai and so they both would come here and it was our responsiblity to take them around. It was Friday nite at office and i couldnt wait for the day to get over to go home. Gee mentioned he would be calling me before they leave around 7:30 ish.
I was having a client call and my cell started vibrating. Well as it would jus tbe my uncle I thought of taking the call after the call was done in about 10 minutes. That is when the new mesage icon flashed on my cell and on opening it was my sister telling they were going to the hospital for her delivery. I was thrilled but it also meant I would have to travel to Pune again but so what......I called them back and they were on their way to the hospital. Mom said that my bro-in-law was flying in from delhi and since his flight would get him to Mumbai we should all come together.
I immediately called my bro-in-law who said his flight would reach by 1 pm at night and we could meet him at the airport.At 1:00 midnite myself and Gopi went to the airport all the while in between calling to ask how she was and if the baby was born, but it looked like even the baby was waiting for us to reach :). Wwe reached the airport at around 2am, the same time the flight reached. A car was already waiting for us- so in we all hopped and reached Pune directly to the Jehangir hospital at 5:30 am in the morning. 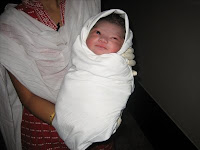 19th Jan 2008: We directly went to the Maternity section and the hospital was empty except for one lone stranger who was sleeping in the waiting room. Apart from him there was Anil, my aunt and my mom inside with my sis. I went inside to take a look and she was asleep with the pain :(. My dad and others were at home and they would come in the morning. My mom asked me and Gopi to go home and get some rest and come back in the morning, even though I did not want to go I reluctantly agreed but the next train was only at 6:30, so we sat doing a lot of time-pass there actually debating whether it was a boy or a girl. We all voted for a girl except for Vijay and Anil who said it would be a boy. At 6:15 am some of the nurses came for a check-up and said that the baby would be delivered soon, so then we decided to stay , but nothing seemed to be happening and as we were very hungry we went and had some poha and tea at the restaurant just outside. it was 8:30 by now, there was a India-Australia match going on and Australia was playing very well with no one getting out so much of our conversation was even directed there.by this time the waiting room was full of people. I was very tired and managed to cuddle at a corner. I just got a nap when at 9:20 my mom came out and said that they had taken my sis to the labour room and it would soon happen. I couldnt sleep after that and me and Vijay were waiting outside the labour room. Even the security lady waiting outside was anxious and she went inside to check and after some time came out telling the baby was born. I ran to tell my mom, Gopi and others. Then they called my mom inside with a towel and soap and oil and she came out and told us it was a boy. Soon the doctor followed telling it was a boy and both mother and son were fine. Then they called the father and us inside to take a look at the newborn. There he came out with a pretty lady nurse all wrapped in a white towel outside to this NEW WORLD!
Posted by Horizon at 2:34 PM No comments: