Ritvik's 2nd birthday was the first with us (as for the 1st one he was in India) but we had not planned on doing anything major.
I wanted to have a kids party but the age group of 2yrs -3yrs is difficult to manage. We were not as keen as our friends who kept asking us as we were planning to go to India for vacation and was not sure if we would be here. Finally we decided to  book the party hall but that was already booked and so we started checking out other places. We attended another kids birthday party at Mall of America and Ritvik had such a great time that we decided that to be his birthday venue.

By Oct end we finalized the guest list, booked the cake, I wanted the most delicious milk cake that I had tasted, so we booked that Ritvik wanted the Spider man theme which we got on the big cake and a smaller one (just in case we fall short). We couldn't get outside food and hence decided to get pizza from a sop at the MOA. We also wanted it to be a little indianised and hence we ordered some baby corn manchurian as starters and I decided to make some custard for the dessert. We kept 11:30 as the time  as the time hoping that everyone would be in by 12.

Nov 12th early morning dawned as a beautiful day. It was lovely weather for the peak winter, we did not even have to wear jackets. Ritvik had fever, kept us awake most of the night and finally fell asleep at 7am in the morning. Gopi had to leave by 9 to make sure we got the area and set up decorations. I had to cook the custard. Morning, there was no electricity, what a bummer!. Electricity came after some time and I started with my cooking in a big rush. Once done I had my bath and woke Ritvik by 11, he was still feverish, gave him some Tylenol and got him ready. It was already getting late and I had to also pick the cake. Gopi kept calling and asking us to come fast. Finally we left home, picked the cake and reached the mall, only to find no parking spot. I circled for 20 minutes before finding a spot and then when we went inside the lift was not working. All the guests had arrived and finally we reached by 12:30. 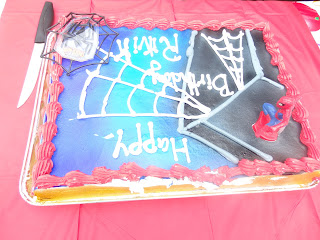 Posted by Horizon at 4:43 PM No comments:

So finally Diwali Dhoom 2011 was hosted on Oct, 22nd (Saturday) at the apartment complex.
The day started with visiting the party hall at 11 am and helping in the decorations. to be honest all I did was make sure Ritvik kept out of people's way. G helped them put up all the hand-made lanterns and other decorations.
Afternoon quickly made some methi paratha, put Ritvik to sleep and I too napped for an hour.
At 4:30 went to do hair and face-make up. Returned at 5 only to see a cranky baby, was getitng dressed, putting my bangles and Ritzu wanted to wear them too. No amount of reasoning worked and finally ahd to give him two of the bangles to wear.
Programmes were scheduled to start at 5, we reached there by 6pm.
Everyone was beautifully dressed in traditional wear.
Once the mike was set-up there was pooja and a group song.
Next was Welcome Speech by Raji.
Then the hosts myself & Alpesh introduced ourselves and announced the next segment which wa s a bharatnatyam by Ira.
A note to be added here, the mike was bad, we had to shout a lot to be heard by the already noisy public.
Next we had the lttle kids dancing
Then we had kids dance of a slightly bigger group
Followed by a Marathi Lavani Song
then came another kids dance
We had a hindi song
Then we had a marathi performance
Punjabi Folk Song
Hindi Song
Gujarati Dance
Kid Solo Dance
Mens dance
Diya Dance
Game
Prize Distribution
Dinner
Dj
Posted by Horizon at 4:42 PM No comments:

Another Milestone for R Junior

R Junior completed another milestone where in she started eating solid foods. Last Sunday i.e 14th December we went to the temple and gave her some rice payasam to eat. For the older one we had organized a pooja by the temple priest and then invited friends over for lunch, for the younger one we just kept it a low-key family affair. I wanted to start only after 6 months but she is always lookign at us eagerly while we eat and so I felt that maybe it was the right time to start.

I did not get time to buy cereal so even after temple feeding she was only breast feeding for a week, it is only 2 days back I got rice cereal and we started giving her one time in the mornings. Slowly I will  start introducing other foods, let's see how she likes it.

Posted by Horizon at 4:42 PM No comments:

The third day(Dec 5th, 2019), since me and my son had booked for Snorkeling we had to embark the boat at 10am and so we had to have an early breakfast, we both woke up at 9 and went quickly to the café to stuff ourselves, the boat was going pretty fast and soon they announced that due to weather conditions the ship would not halt at the private island but would go directly to Bahamas.

Me and my son strolled around for some more time and went back to the cabin and gave the other two the updates, they leisurely woke up and had a late breakfast, we then left the kids to the day - care and pretty soon the ship docked at Bahamas port. Me and hubby went out and left the port area and walked around to the nearby beach, we were also checking what activities we could do the next day with the kids. After a good 2hrs we came back to the cruise, we then checked in, went to the hot tub, had dinner and went for a good nite's rest.

The next day woke up(Dec 6th, 2019), had breakfast and embarked from the ship. Initially we decided to go touristy and get the locals to take us out to some beach but later on just decided to go with what the cruise ship was offering.
We booked a trip to Atlantis--The Lost City. It was pretty expensive but we decided to go with the safe route. A bus took us to the Atlantis hotel where we had a 45 min guided tour of the museum and their artifacts. Then we were left to ourselves, just asking us to reach back to the ship by 5pm. All of us changed and went to the nearby beach. It was chilly for Bahamas weather.
We then took the bus back to the main port and had food from a small shack. The fish tacos and shrimp tacos were just delicious.
We then went and embarked back to the cruise ship.
We wanted to catch a ice skating show on the ship and were just in time for that. Riti got to be one of the child actors to go on stage with them, it was a delightful experience.

We then went for our last dinner which was fabulous, took pictures with the staff and basically everywhere in the cruise.
Night time, we packed our baggage's and kept it outside. Woke up the next morning(Dec7th, 2019), had breakfast and when our time was called we had to vacate the ship. Immigration was a breeze,w e got our luggage, took a taxi and headed to Miami airport.
After a 3 hr flight we were back home
Posted by Horizon at 12:17 PM No comments: