August 2011- A Month of Celebrations

Though August is still not over, it was a month filled with lots of outings & celebrations.
It all started on :
Aug 2nd 2011:The apartment complex we stay in decided to host the National Night Out which is an event meant to increase awareness about police programs in communities. You can find more information here.
Two big bouncers were got for the kids to play in(even adults if they cared), me & hubby both played c/o my little one. They had hamburgers given out, plus a DJ with a very cute African American who did some really cool dance steps and gave out gifts to all the kids. 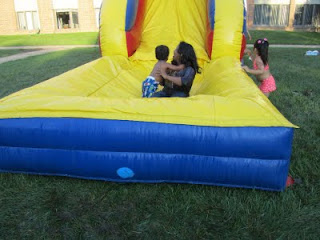 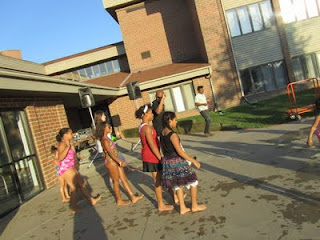 Aug 3rd 2011: Darling hubby's bday. he got to cut 2 cakes. One that his friends got and 1 was a yummy upside down pineapple cake that I prepared. The picture of the cake I prepared does no justice to the softness and the yumminess of the cake. 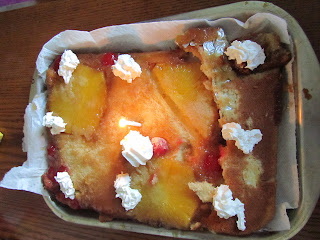 Aug 6th 2011: We had to attend a baby shower and the whole afternoon went in having fun with friends. 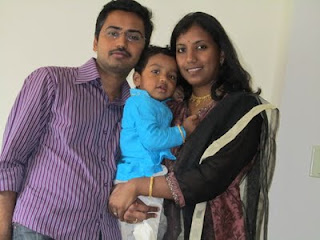 Aug 13th 2011:Aug 13th 2011: Visited the Carver County Show. Lots of petting animals and Ritvik sat on the merry go round for the first time and enjoyed it thoroughly. 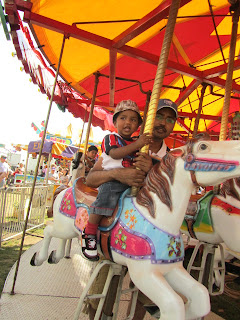 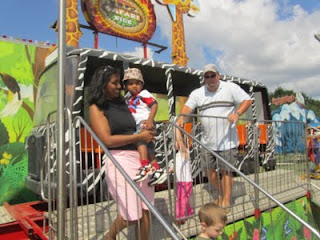 Aug 15th 2011: India's Independence Day Celebrations, again some Indians decided to have a celebration among all Indians complete with flag hoisting, singing patriotic songs, snacks and beverages. Kids came out dressed in their traditional best. It was a proud moment as each one sang the National Anthem in another country. 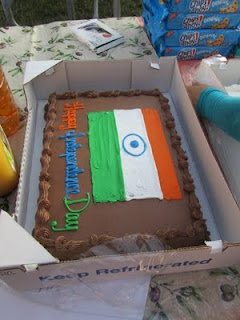 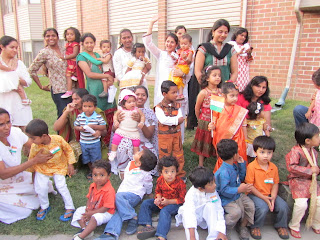 Aug 20th 2011: Went to Kite Festival and created our own kites and then went to the park for a friend's farewell. 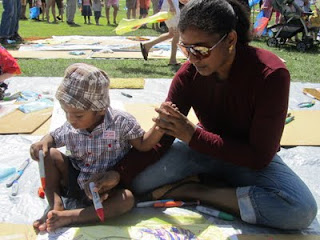 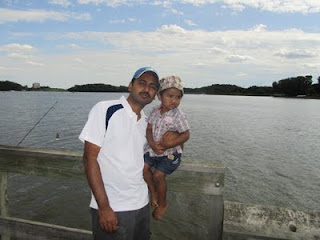 Aug 21st 2011: Went to the Renaissance Festival.The Minnesota Renaissance Festival is a medieval village complete with royal court, peasants, jesters, knights-in-armor, and ladies-in-waiting. It is asthough one has been transported back to another world. 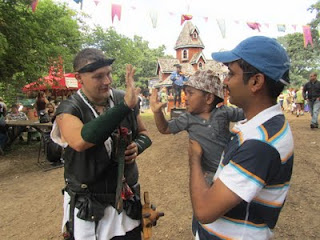 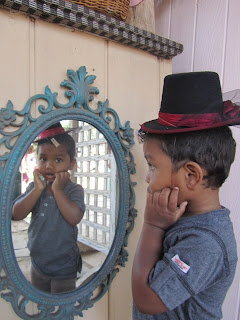 Aug 23rd 2011: Kids Play Date. So gain another dear friend in the apartment complex took an initiative to organize a Kid's play date or Kids Sports day if you may call it. The kids were divided into 3 groups and there were lots of activities for them.
The sports included Musical chair, lemon & Spoon, bowling game etc. Later on snacks & juice were provided and the day ended by flying lots of helium ballons in the sky. Dress code was red and it was amazing to see all the wonderful kids in the red attire. 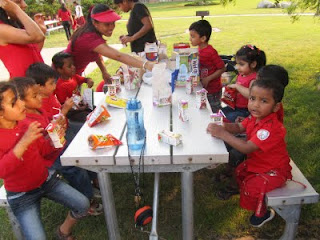 Posted by Horizon at 1:26 PM No comments:

Letter to my darling Ritvik - 21 months

This Friday August 12th 2011 you will complete 21 months and I feel the need to let you know all that you have been doing till now.
In the morning as soon as we get you ready and put your shoes on, you cant wait to get out of the house and will go around the house telling 'key','key', which is an indication that we should take the car-key and take you to day-care. Though you still cry at drop-off, it is much better now that you have adjusted there and can even call your teacher by her name 'Jenny'

You have suddenly entered the 'No' phase. For the past 2 days you have been telling 'No' for everything we ask you to do, driving us nuts at times and giving us lots of chuckes in the process. Infact yesterday night you were shouting 'No' even in your dreams. This led me to think of how many times we stop you from doing things by telling 'No'. No Ritvik, dont spill the milk. No Ritvik, dont climb on the stool. Well you are giving us a taste of our own medecine and so we decided to omit the work 'No' from our vocabulary to teach you to say 'Yes'

We love the way you dance whenever music is played. Infact at a gathering bny the apartment friends were amazed to see you dance as soon as the music started. You rock baby!

You can speak single words very well but have not yet started speaking sentences, Well for some words you would just tell the endings and for some wors you have your own vocab like 'Bawa' for duck, 'Ina' for water, 'Pi' for Topi(hat) and so on.

You don't go very easily to strangers and still need Amma & Appa to be near you while you play but you are generous in sharing your toys.You eat & sleep well but sometimes if you are hungry (especially in the early mornings), you get all cranky and then start screaming. At times like these I fell like throwing you out of the window, when I tell you this later(when you are in a good mood), you smile which melts my whole heart.
You are so generous with your kisses and you shower me with them on my fore-head, eyes,nose,2 cheeks and chin. 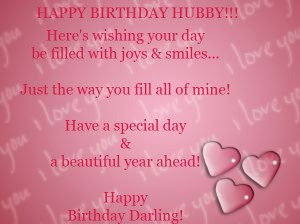 Wishing you a day filled with happiness & joy

I picked this tag from here. So go ahead and indulge if you like

A. Make a list of 5 things that are in reach.
Keyboard, notepad, bottle of water, headset & pen

B. What is your favourite holiday?
@Kerala or lazing at home

C. What is your fashion style?
Wearing clothes that are comfortable and I can carry off well with my figure.

D. What’s your occupation?
IT

E. What do you hear right now?
Doors opening in the hallway.

F. Who was the last person you hugged?
My hubby.

G. What random song just popped in your head now?
Husa Busa..all fall down, oh yeah..my kiddo sings this all the time now.

H. What did you do today?
Got up, got ready for ofc, dropped baby at daycare, saw a live snake, now at office.

I. What was the last text message you received?
No cell, no message, does work Indbox count?

J. What websites do you always visit when you go online?
Gmail, Times of India, Facebook, other blog Sites.

K. What is your next big planned purchase?
Hmm, A land probably.

L. If you could afford to go anywhere in the world, where would you go?
Home(India).

M. Where do you see yourself in 5 years?
A stay at home mom with one more kid running an NGO.

N. Where’s your tattoo/Where would you like a tattoo?
Would love one just above my butt.

O. What are you doing this weekend?
Attending Baby Shower.

P. If you could play any musical instrument, which one would you play?
Guitar.

Q. What’s the one thing you need the most now?
Sleep..lots & lots.

R. Are you a creeper?
Nope.

T. What’s the last good movie you saw?
Not sure about good but latest will be 'Beyond a Reasonable Doubt'

U. What’s your favourite quote?
"Whatever happens, happens for the Best"

V. What is your favourite colour?
Blue

W. Give us three styling tips that always work for you:
-Kajal in my eyes
-Hair left loose
-Clothes that fit

Z. What inspires you?
Books and Blogs.
Posted by Horizon at 2:47 PM 1 comment: