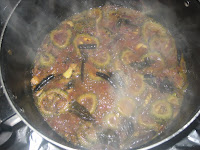 I do not like karela a lot and I never eat it much as a kid. Now that I know it's nutricious value I try to add it in my meal. So this Friday when we went to the Indian store and I saw some really fresh karela, I bought it and Saturday nite for dinner we had some tasty pavakhya kozhambhu.
Here is what I did:-
Heated oil in a kadai and put some mutter to splutter and some red chillies and curry leaves. Added some garlic and sauteed finely chopped onions with salt. To this I added some sambhar powder, bitter gourd and let it mix well. Once the karelas were fried well I added  1 cup of water with tamrind juice and let it boil. To this I added jaggery and let it cook for some more time. Now I still found this bitter and so added more jaggery. You can adjust the salt, pepper to your consistency.
Finally it turned out to a very tasty dish with the sweet and spice mixing well.
P.S:- Would not have completed this post if it was not for Priya asking me this receipe:)
Posted by Horizon at 10:07 PM No comments:

This receipe goes for the My Legume Love affair.

My Rajma Masala
Ingredients:-
Rajma soaked for 4-5 hours atleast.
1 Onion
1 Tomatoe
Chillies
Garam masala
Salt
Coriander Leaves
Butter(optional)
Pressure cook the soaked rajma with salt. I normally keep for 3 whistles on medium flame. Dont want the rajmas to get very mashy.
In a kadai take oil, put cumin seeds, finely chopped onions, salt and saute, once onions are brown add half spoon of garam masala. Fry for a minute, now add a little water from the pressure cooked rajma. This is so that the spices mix with the rajma water, gives more taste.
Now add finely chopped tomatoes, chopped green chiliies, salt and red chilli powder as per taste. Close and let the tomatoes cook well. Now open and add the boiled rajma with the water and cook for few minutes. Garnish with butter and corainder leaves.
Yummy rajma masala is ready. 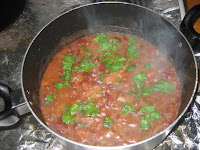 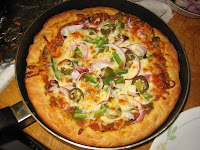 For the base:-
I took half cup of water and heated in microwave, to this I added some yeast powder. kept this aside for 10 mins. Took 1 cup atta in a vessel. For the base you can use atta or maida. To this flour I added the yeast mix (after 10 minutes), mix and keep aside. Now in a separate bowl take 2 cups of atta, add 2 tablespoons of olive oil,half spoon sugar and 1 spoon salt, then add the yeast mixture and mix like for chapatis till it is soft. Once it is soft put few olive oil drops on top and keep aside for 30-45 minutes covered by a wet cloth.
After 30-45 minutes again knead the flour one more time, this is for proper aeration and keep it aside for another 20 minutes.
For the pizza sauce:- I tool 4 ripe red tomatoes, Put them in boling hot water for 30 seconds and then immediately transfer them to cold water. Now the tomatoes are blanched and you can easily remove the skin. 2 of the tomatoes I used to make a paste and other 2 I finely chopped. Also chopped some capiscum.
Take a kadai, heat oil, add garlic, saute, add capsicum and chopped tomatoes. After few minutes add the tomato paste. Cover with lid and let it ccok 15-20 minutes till all tomatoes are well cooked. Add salt, a little sugar, add some fennel powder, the herbs(oregano,marjoram and basil), a little pepper if required. Once it gets done to a proper consistency(not to water)switch the gas off. 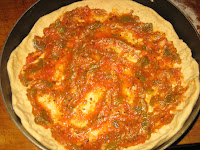 To make the pizza:- Take the base which by now is grown in size in a frying pan. Spread it over the pan evenly. Over this spread the pizza sauce. Place the toppings, I put some onions,capsicum,jalapenos, spread cheese evenly, pour a few drops of olive oil. Also batter the sides of the pizza with olive oil.
Now heat it on the stove for 10 minutes, then transfer it to the oven at 450F for another 15 minutes. Once the cheese on top has become a golden brown color you know the pizza is done.

Happy Eating :)
Submitting this to the Yeastspotting event
Posted by Horizon at 3:14 PM 1 comment:

When I was a kid and we were at Dehuroad I remember one day when my mom, our neighbor Saramma aunty and Pasha aunty decided to have a sort of family get together. Each was to make 2 dishes. I do not clearly remember what mummy or Saramma aunty made but Pasha aunty made this sweet dish with bread which was superb. I fell in love with it instantly and till date it is my favorite dessert. At that point I did not even know what it was called :)

Later in life while I was working at TCS Borivali, the canteen celebrates food mela where once in a month they would cook the cuisine of a state. One day it was Hyderabad and as I stood in the line for desert, my eyes gleamed as I saw the same dish that I had eaten when I was young. My eyes darted to the name plate and there it was written in bold- Double Ka Meetha.
It is named so because the dish is made from bread and in olden days bread was called double so Double ka meetha.
Anyway now that we are in US one day I decided to try this receipe.
Here is how it went:-

In a vessel heat some oil/ghee/butter(I did not use ghee as I was health conscious)
Fry thebread pieces in them till brown. Take it out in another bowl. In the same vessel fry the nuts, once fried place them over the bread slices. In the same vessel add 2 cups of milk. Keep boiling this till it is reduces to half. Once reduced to half put some cardamon and simmer on low flame for 5 mins. In another vessel take 2 cups of water and boil. To this add 5 tbls of sugar and heat. After a time this becomes a thick browny mixture. Stop at this point. Pour the sugar syrup over the bread pieces. Pour the milk over the bread pieces. After it cools refrigerate. You can eat it warm or cold.

Right now I have no pics but will upload when I make them again. Me and Gopi eat some the same nite after dinner as I couldnt wait till the next day and remaining we kept in the fridge which got over the next day.
Truly a lip smacking dessert.
Posted by Horizon at 11:34 AM No comments: 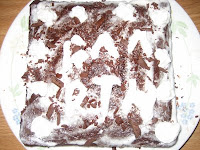 Jan 18th 2009 - (Sunday)- Tomorrow is Paarth baby's 1st birthday. How time flies . It seems like it was yesterday when he was brought out by the pretty lady nurse.
I was in the US. It was already past 12 am in India and so officialy it was his birthday.
I had decided weeks before that I would bake a cake myself for his birthday.
After checking a few receipes I decided on the Black Forest cake.
Sunday after calling home I was all set to start.
Ingredients:-
5 eggs (seperated yellow from white in 2 sepearate bowls)
Cocoa powder
Sugar
Maida
Butter
Cream
Coke
Baking Soda
Vanilla essence 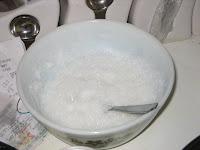 I took the egg whites in a bowl and kept stirring with a spoon them till I get a froth. This was the process that took the most time as I did not have an electric whisk, but after 30-40 minutes I got the white froth
on top.
I seperated this in another bowl. In a seperate vessel I took the egg yellow added vanilla essence(1 drop) , half spoon melted butter and powdered sugar 5 spoons and beat them for 5 minutes.
Now in the egg white I added this mixture and lightly mixed it 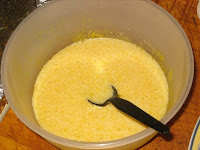 with a spoon.
To this I added 2.5  cups of maide and  .5 cups of cocoa powder and half spoon of baking powder. I mixed all this ingredients. Then I needed to add some cola product, as I had mountian dew at home I added half can of mountain dew to this.
Then I took it in a butter greased cake pan and baked it at 350F for 30 mintues. Once it was done, I took it out and cooled it.
The chocolate sponge cake was ready. 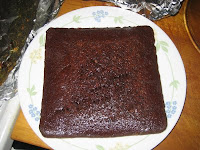 Now to make it into the Black forest
cake. I cut this cake into 2 layers. Take some water and add sugar in it to make a sweet mixture. Sprinkle
this on the cut chocolate layer.. Cover it with cream and strawberry. now put the other layer on top. Cover this with cream also and put dark chocolate(cut)  on top. Then I put the icing and decorated it.
After decoration it looked really yummy and so I cut the cake Wishing Paarth lots of happiness and many more birthdays to come. Luv u kissi baby.
.

I am sending this for the Just for you event.
Posted by Horizon at 10:22 PM 1 comment: