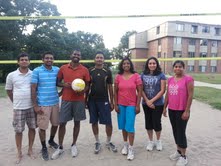 We WON. Yipeeeeeeeeeeeeeeeeeeeeeeeeeeeeeeeeeeeeeeeeeeeeeee Team Players: - Amarnath V, Udhay,Karthi,Gopinath K, Seema,Yashu and Kavita. I did not update our results the whole of Aug but we did end up 3rd in the final Standings. After this were the play-off's where we won and on Aug 21st we had the Semi-Finals and Finals on the same day. The Semi-Finals was agaisnt Panini Bros Hit Squad. The first set we just won with a score of 23/25. The next set we won very comfortable and went to the Finals. The Finals was against the top team SandyDrawers. We won the first set, they won the second and the third was a tough one with a 15 pt match. Luckily we got a lead and went on to win 8-15. Yours truly did a dive to win the winning point. Proud moment.
Posted by Horizon at 2:45 PM 3 comments:

From not knowing how to swim to floating in the lake 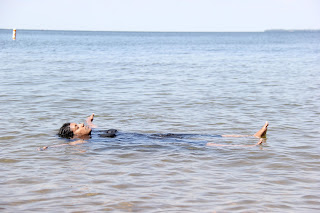 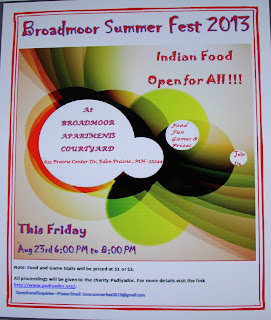 The Broadmoor Summer Fest 2013 conducted was a great SUCCESS. Will update with more details and pictures.

Posted by Horizon at 8:24 AM No comments: 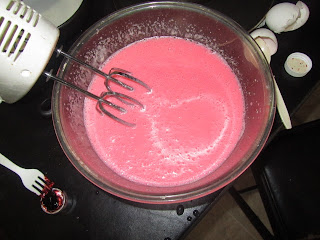 So it has been 15 days since I have put my updates here. There is so much happening and I am not getting the time to track down everything. First of all let me put up some pictures of hubby's bday cake and the celebrations. 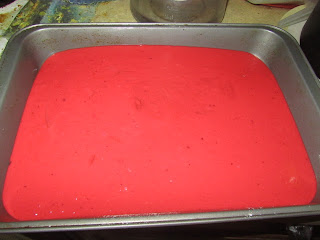 This is the final product. It was the most moist cake that I have made till date. 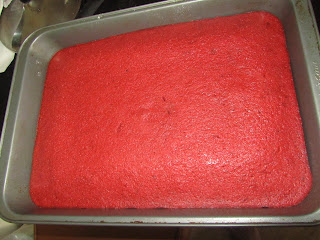 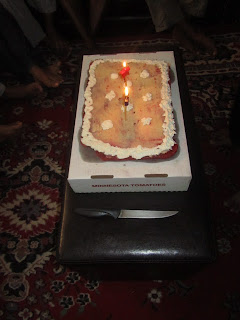 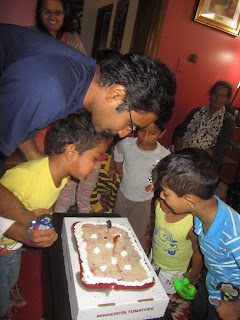 I felt like doing a meme and I know of this site that hosts a lot of them. I am doing part two of the alphabet meme. More details here: http://sundaystealing.blogspot.com/ Massive Alphabet Meme, part two

The Letter N Do you have a nickname? --Yes, Paapu
What is your favorite number? 3, My bday and hubby's bday fall on this date
Do you prefer night or day? Day


The Letter O What is your one wish? To become a writersome day.
Are you an only child? No, Have an elder sister
Do you wish this year was over? Nope, Want to enjoy every second that I am living.

The Letter P What is one fear that you are most paranoid about? Dying early
What personality trait would you look for in someone you wanted to date? Should be able to hold a balanced conversation

The Letter Q Are you quick to judge people?Nope

The Letter R Do you think you are always right? Nope
Do you watch reality T.V.? Actually I do, mTV Roadies and MTV Splitsvilla
What is a good reason to cry?I dont think there is any reason to cry. Why waste time crying, just act on whatever is making you cry.

The Letter S Do you prefer sun or rain? Sun, Sun more Sun
Do you like snow? Yes, it looks beautiful the first time but when you have to endure it everyday it gets irritating.
What is your favorite season? Summer

The Letter U Are you wearing underwear?Yes
Do you open your eyes when under water? Trying to a little nowadays

The Letter V What is the worst veggie? Cannot think of anything
Where do you want to go on vacation? Italy
What was your last family vacation together? Yellowstone, Wyoming

The Letter W What is your worst habit? Lazy
Where do you live? Currently in US

The Letter Y Do you like the color yellow? It is a nice color on clothes
What year were you born in? 1978
What do you yearn for most? Peace of Mind and Good Health for Everyone

The Letter Z What is your Zodiac Sign? Taurus
Do you believe in the Zodiac? Not much
What is your favorite zoo animal? Zebra
Posted by Horizon at 10:38 AM No comments:

July 3rd(Wednesday):- Finally the day arrived to get going for our trip. 2 families(ours and K) decided to fly. Our flight route was Minneapolis – Denver and then drive to the cabin. The flight was scheduled at 2 but was delayed by and hour which gave us much breathing space. In the morning I quickly prepared chapatti and capsicum paneer sabji to take on the trip. G came by 1 and we reached the airport by 2. We checked the car seat in and were told we could pick it at the destination airport i.e Denver.

Once the security check was done we had more than an hour to idle away. R and A(the kids) went to the play area and I tagged along with them. At 4 they announced the flight and we got in. We reached our destination by 5:15. The car rental office was 10 miles away from the airport and they told us they would close the doors at 6. We had to wait for the car seat and could not leave immediately. Our eyes kept glancing at our watches and back. Finally we got the car seat and we rushed out to catch a cab and reached the rental place dot at 6 pm. After completing the paperwork we went to a supermart to get some snacks and stuff. Finally we set of at 6:40 pm. It was a long tiring 9 hr drive to our cabin. The clock just wouldn’t go fast, we could feel each hour passing by. Finally at 4 am the GPS said 10 more minutes to destination. I could almost visualize myself in the bed in another 20 mins. Ah! Sweet glory.

But this was not the case to the be, the place where GPS told us was a dead-end and pitch dark. We still went someplace ahead but there was nothing just a lane going nowhere. Being so dark we di dnot want to get lost so we turned and came back to where we started. It was already 4:30 am. Now. G then called the lady and after going much back and forth we realized we were at a wrong place and had to travel another 30 mins. Finally at 5:30 we reached the cabin. It was beautiful, a lone cabin sitting in middle of acres and acres of farmland. The cabin itself was 3 storey with all the required neccessities. We got a room and crashed on to the bed. The other 2 families reached at 7:30. They had their own adventure.

We woke up by 12, freshened up, made lunch of veg pulav and at 2 set off for Grand Teton Park. On the way we stopped at Johnson Point for lunch, from there we travelled to the park. At the park we took the Jackson hole Ariel Tram Ride. This cable ride takes us to the summit of Rendezvous Mountain in about nine minutes. Guests will travel 4,139 vertical feet to get to the top of the mountain Read more: http://www.city-data.com/articles/Jackson-Hole-Aerial-Tram-Rides-Jackson.html#ixzz2bClDiBKb.

We were at the top of the mountains overlooking the entire park. As usual we clicked lots of pictures and then drove down. It was already evening and hence we decided to go back at the motel. On the way we stopped over to purchase some noodles to prepare for nite. Once we reached the cabin we cooked dinner of egg noodles and everyone was off to bed, 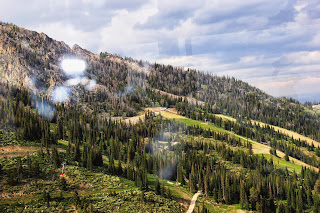 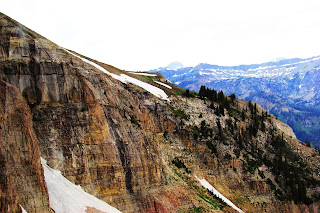 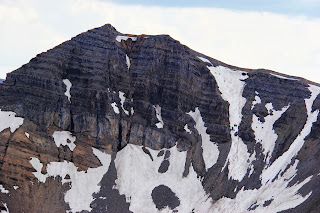 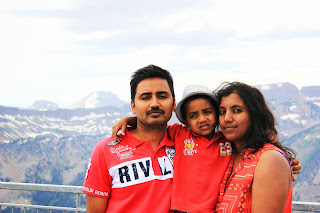 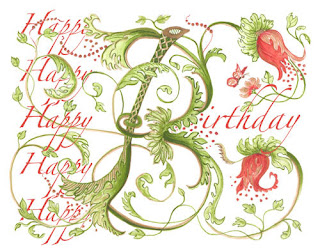 3rd August 2013: Wishing you a very very Happy Bday. I called few friends home for a cake cutting and when one of them asked me if it was a surprise I went back in time thinking how I have never given you a bday surprise yet.
Over the years:
2005: I was in Stamford, US and you were in MN. I send you gifts and cards. One of them was my childhood picture that you had liked a lot.
2006: We were in Mumbai, India and celebrated with your roomates and friends
2007: We were in Mumbai, India and it was only the two of us. I had decorated the house with cards, candles , got a cake with a big lotus type candle.
2008: You were in US and I was flying from India to Wisconsin. We met at Chicago and on your bday were were driving to WI. I had couriered you a personalized bottle with the sayin "Grow old with me, the Best is yet to come" (which Ritvik broke this year)
2009: TCS friends came at midnite for cake-cutting  in US
2010: In US again and had friends come over at midnite for cake cutting. You did give a treat to all our friends the next day.
2011: US: I baked an upside down pineapple cake and got flowers(bouquet) from work. Had one family friend over at home.
2012: US: MIL reached here and TCS friends came at midnight for cake cutting. I baked a readymade carmalized cake and called some friends over
2013: US: This time I baked a red velvet cake with buttercream frosting and had some friends over for cake cutting.